This was South Africa’s best performing unit trust in 2021. You’ll never believe what happened next… You may not want to know what happens next. Unfortunately, in the investing world, being overly curious and adventurous can be hazardous to your wealth.

Over the last few weeks, the financial media has been on a blitz campaign to promote the best performing funds of 2021. The marketing machines will be working overtime to make sure the investing world knows just who has shot the lights out. The awards and praise will follow.

As potential investors in these funds we need to ask if we are impressed by short term performance, headlines, and awards or by sustainable long-term outcomes?

Intuitively, buying the best performing funds would seem to make sense. If a manager is on a winning streak, shouldn’t they be able to keep it up? If only it were that easy, the tricks that worked in one year probably won’t work the next. Buying the funds that have already performed well is an almost surefire way to disappoint oneself. The industry term for this is ‘performance chasing’ and it is a well-researched behavioral phenomenon.

Over short periods, performance can be affected by many factors outside of the manager’s control. This randomness can both enhance or detract from fund performance. In both cases, it means we place little emphasis on the short term.

The flood which sunk the ARKK

It’s not unusual to find legendary funds from previous years at the bottom of the performance tables. There are several reasons why this might happen but a few of the common ones are:

The poster child of the pandemic stocks was the ARK Innovation ETF (ARKK), managed by Cathie Wood of ARK Investment Management. The fund and its charismatic manager took the investing world by surprise in 2020 when it posted a gigantic return of 149%. The fund assets swelled as investors flooded the firm with new money. Totals assets grew to $55bn by the end of the year, most of this from new inflows.

The firms’ fortune was to be short lived. In 2021, the ARKK ETF crashed more than 23% even while the Nasdaq-100 Index gained more than 27%. In January, the damage continued with ARKK being down another 20%, bringing the total drawdown from the highs to a whopping 52%.

Many investors would have done quite well being invested in ARKK for the long term but what of those bought in after the massive gains of 2020?

In the six months between, September 2020 and March 2021, the ARKK ETF received inflows of more than $13 billion. Needless to say, the average investor experience in those funds is a bad one, in fact there are few places you could have invested and done worse in a year when equity markets were generous to most fund managers.

ARKK is an exceptional case but an important one. Had you bought and held sleepy Berkshire Hathaway at the beginning of the pandemic you would have had the same outcome albeit with fewer thrills and a lot less anxiety. 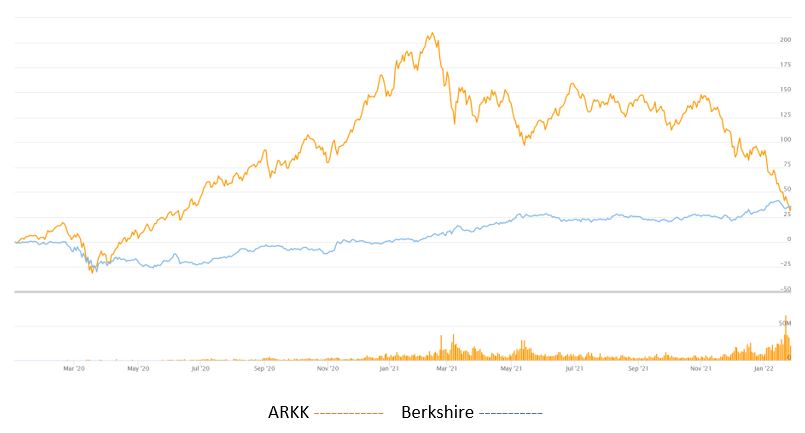 Locally, we have had a similar experience with SA Equity Funds. After being deeply out of favour for the better part of five years, there is renewed interest in local equities. Suspiciously, the interest in going overweight SA is only after the JSE All Share Index has doubled in two years. With the local economy and the fiscus looking in worse shape now than before the pandemic began, we would look both ways, twice, before crossing this street. Any allocation decision should be based on our expectations of the future and not what we see in the rearview mirror.

If you chase performance, you’ll never catch it

The simplest behavioral changes could vastly improve the investor experience. A study by the consulting firm DALBAR, examined the effect of chasing returns between 1984 and 2003. Investors in mutual funds who frequently traded out of funds during that period earned an average annual return of 3.5%. In contrast, the market, as measured by the S&P 500 Index, earned a 12.9% average annual return. The results consistently show that the average investor earns less – in many cases, much less – than fund performance reports would suggest.

A further study by Vanguard compared the returns of a simple buy-and-hold strategy (in all funds) versus buying the best performing funds[1]. The results are startling.

Figure 2 Buy-and-hold was superior to a performance-chasing strategy across the board: 2004–2013[2]

In all nine equity style boxes, the returns produced by the buy-and-hold strategy were significantly better than the performance chasing strategy. The legal disclaimer: Past performance is not necessarily indicative of future results, is often ignored but seems to certainly hold true among the recent best performing funds.

While a twelve-month period may tell us something about what drives the fund performance and how the manager acted in a certain environment, it doesn’t say anything about the ability to repeat that process over and again. As long-term investors, across the asset class universe, we are looking for managers who we can rely on to perform consistently and to ultimately deliver on their mandates.

In building up our model portfolios, manager selection and allocation is driven by the following traits as part of a qualitative and quantitative process:

These are the drivers of performance over time. We look for consistency and try to stick with our chosen managers. This isn’t to say that we won’t change our minds when needed. If a manager is struggling, we will dig deeper to understand what the challenges are. When there are changes to key personnel, we will have to decide if the remaining team can deliver the goods. Perhaps it is a problem of their investment style being out of favour. Investors can only stomach underperformance for so long, does the manager stick to the recipe or do they start to drift outside of their circle of competence.

Picking managers using a long-term mindset and thorough due diligence is what makes a successful investment strategy. Not being distracted by marketing gimmicks and short-term results is what keeps us in that strategy.

[1] This study assumed that the investor would buy the funds that performed better than the median fund in the prior three-year period and selling those that fell below the median fund performance.